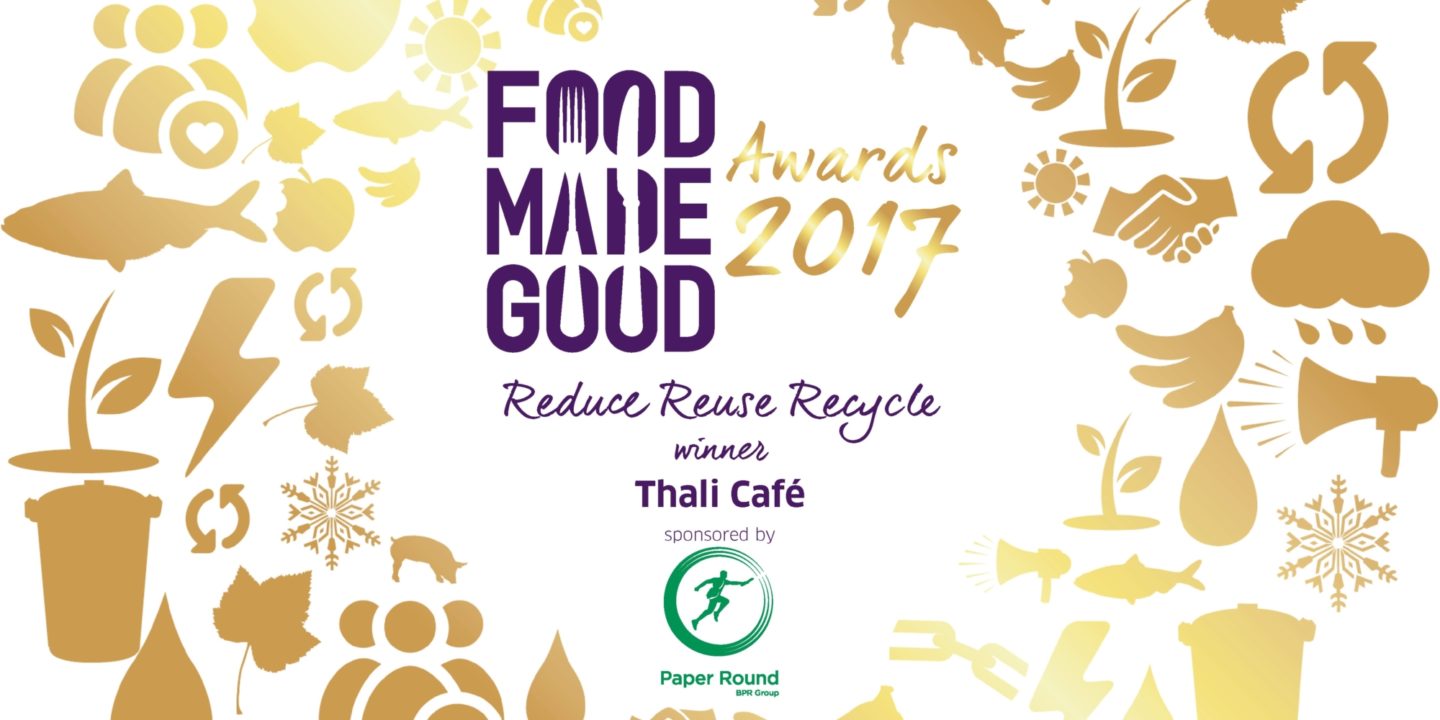 The award was one of 17 presented by SRA President Raymond Blanc and Vice President Prue Leith, at a special ceremony at the Royal Horticultural Society’s Lindley Hall in London. Borough Market food stall Gourmet Goat, popular London breakfast hangout The Breakfast Club, and Richmond’s finest Petersham Nurseries, were among the other winners.

Thali Café, which recently opened its sixth site, in Oxford, has been battling waste since serving its first curry at Glastonbury Festival in 1999. There are now 10,000 proud tiffin tin owners using the reusable box over and over again, instead of disposable packaging. Customers that don’t want to buy the tiffin get to take home their food in biodegradable alternatives.

Thali Café fought off stiff competition from Copenhagen’s Relæ and the UK’s largest café chain Costa, who were both runners-up in the category. 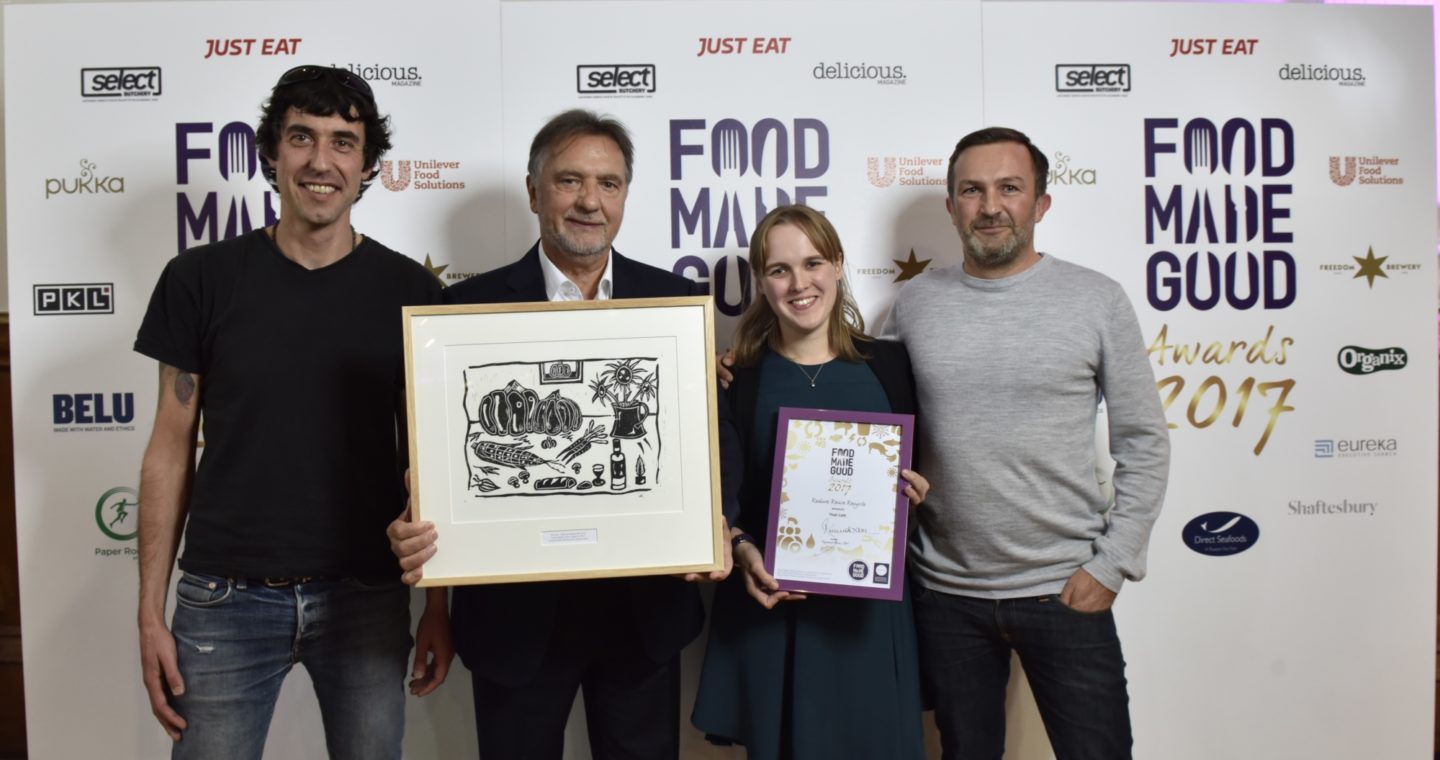 The Food Made Good Awards reward restaurants and food service businesses whose extraordinary accomplishments in the last year have driven progress in the industry and demonstrated that all food can be made delicious, ethical and sustainable.

Ten of the categories define what a ‘good’ restaurant or foodservice business should do. Among the winners in these categories, Pizza Hut Restaurants won the Treat Staff Fairly award for putting its employees first, launching the first, degree level apprenticeship scheme and a company-wide emotional training programme.

The Breakfast Club’s move to match customers growing appetite for avocadoes with a sourcing policy that ensures a fair deal for the farmers in Latin America won it the Support Global Farmers award. Designing a menu centred on two ingredients that would otherwise be wasted, kid goat and rose veal, helped Borough Market stall Gourmet Goat to win the Waste No Food award. And Jamie’s Italian new kids’ menu that includes at least two portions of veg on every plate was the winning formula for the Feed People Well award.

The award for Reducing Reusing Recycling, sponsored by Paper Round, is designed to recognise businesses that have implemented the most effective initiative for keeping as much as possible out of landfill. When the SRA campaigned on this issue during September 2017, it highlighted pioneering efforts of a range of operators, ditching straws, introducing reusable cups and finding new ways to serve everyday products. 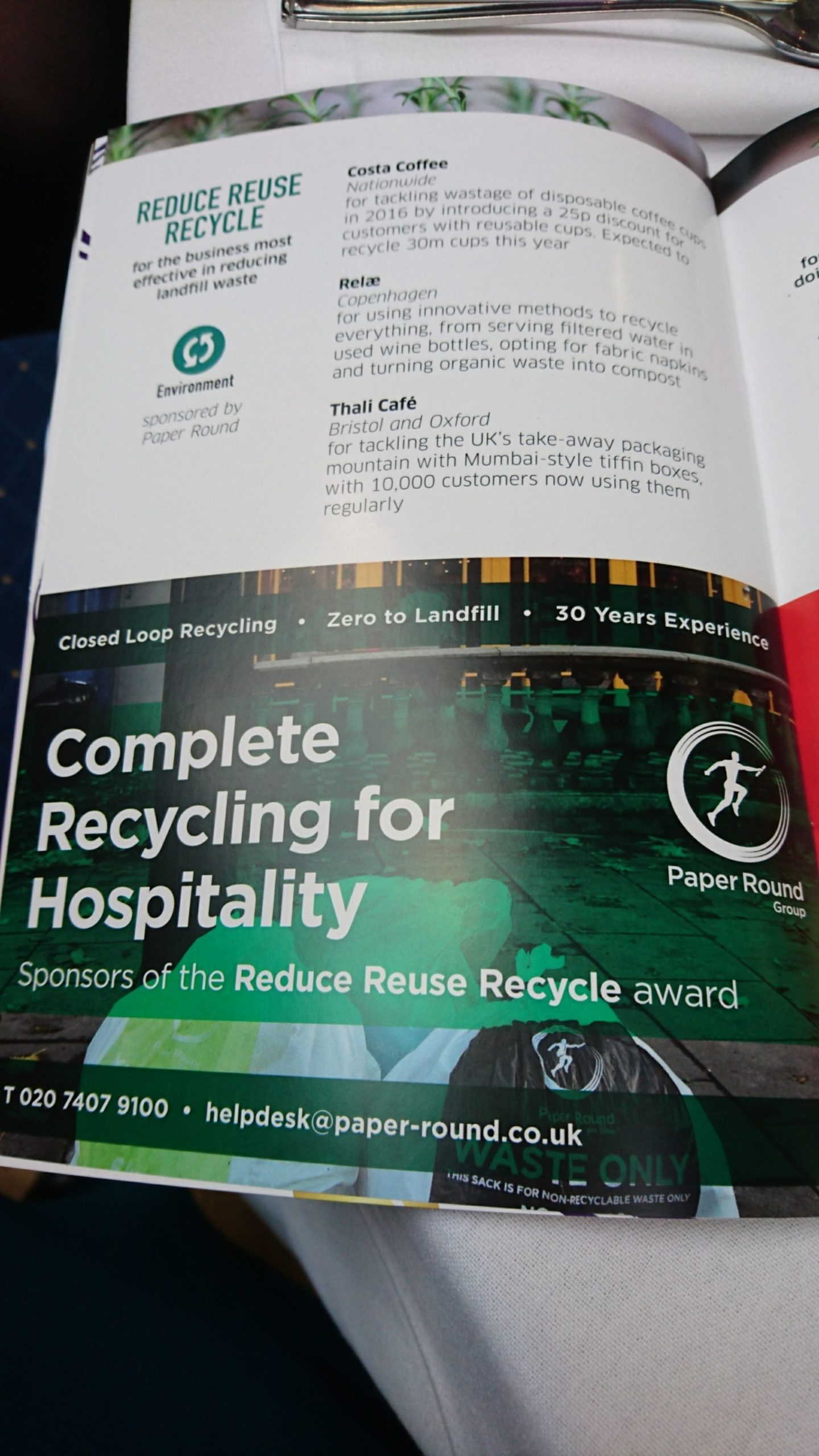 The nominees for the Reduce, Reuse, Recycle Award

“The Food Made Good Awards are so critical, recognising the work and commitment of individuals and organisations responsible for bringing new ethics to our food production, and sharing those values in our kitchens and with consumers.

“The awards truly remind us why we are so proud to work in this industry. Food and its production touches every part of our lives; it will define the society and communities of tomorrow, as well as our health and the health of the planet. Each and every one of the winners have demonstrated food’s huge potential as a force for good. I am honoured to play some part in rewarding their significant achievements.”

In order, the Starter, Main and Desert

As well as the ten Food Made Good themed awards which champion ground-breaking ideas and initiatives to inspire the whole industry to mobilise for greater change across the three main themes of Sourcing, Society and Environment, there are a further six categories. These include the Food Made Good Business of the Year, won by Christian Puglisi’s Copenhagen organic restaurant and bakery Bæst and Mirabelle where customers can enjoy pizza, complete with mozzarella made daily with milk from its own 15-cow herd and salami prepped by the chefs using pork form a local free-range drove.

The Chef Patron of Belmond Le Manoir aux Quat’Saisons presented the Raymond Blanc Sustainability Hero Award to Henry Dimbleby and John Vincent for their unstinting commitment to transform school food, introduced free school meals for all infant pupils and reintroducing cooking lessons to the curriculum. The pair campaigned hard to maintain their hard-fought gains when the Government’s recent manifesto threatened to reverse their work. The award also recognised the achievement of the Leon founders in bringing healthy fast food to the high street. 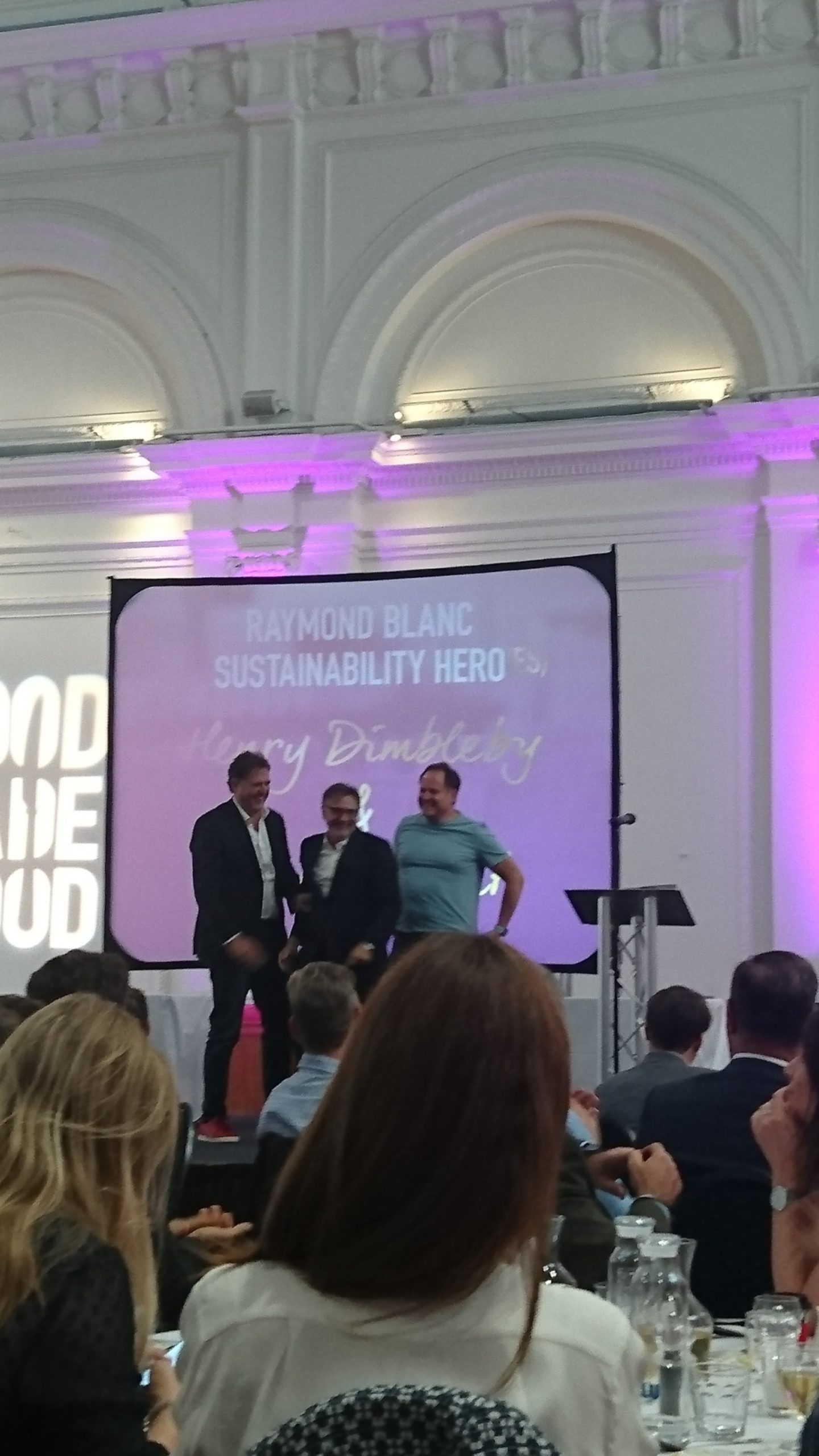 Among this year’s new categories Nando’s won the Open Right award for its new Cambridge restaurant which launched with a host of smart sustainability built in. Chris’s Fish n Chips won the Good To Go award presented to the takeaway proving that you don’t have dispose of your principles when taking food away. Lucky Beach, in Brighton, which built a school in Rwanda using money from the sales of its organic, grass-fed beef burgers and directly traded, coffee was named the People’s Favourite Restaurant, voted for by readers of delicious. magazine.