This week we have a feature blog from our newest recruit, Sarah. Sarah has joined our helpdesk team and prior to joining us was travelling the world. This post originally featured on her own blog which you can see here (opens in a new tab).

It was a breath of fresh air to have a breakfast which was not eggs, tortillas and black beans. I tucked into some street food barbecued chicken, seasoned noodles and refried beans. It was a hearty breakfast which set me up for the day ahead. I began my hike to the 7 alters through the town of Livingston, watching people go about their everyday routines, people were selling food, carrying baskets on their heads and darting around on motorcycles. I turned left onto the beach and walked through precariously built shacks which were restaurants and bars. After these stopped I walked on the sandy beach with the waves crashing against the shore next to me. Palm trees stood tall leaning over the sea. While this sounds romantic and scenic, sadly it was overcast with a serious problem. Livingston beach was carpeted in plastic rubbish. It was home to mouldy bottles, discarded shoes, old sandy toothbrushes and much much more. Not only were these inanimate objects present but also colourful specs of broken down plastic particulates were mixed in with the sand. It was heartbreaking to see. 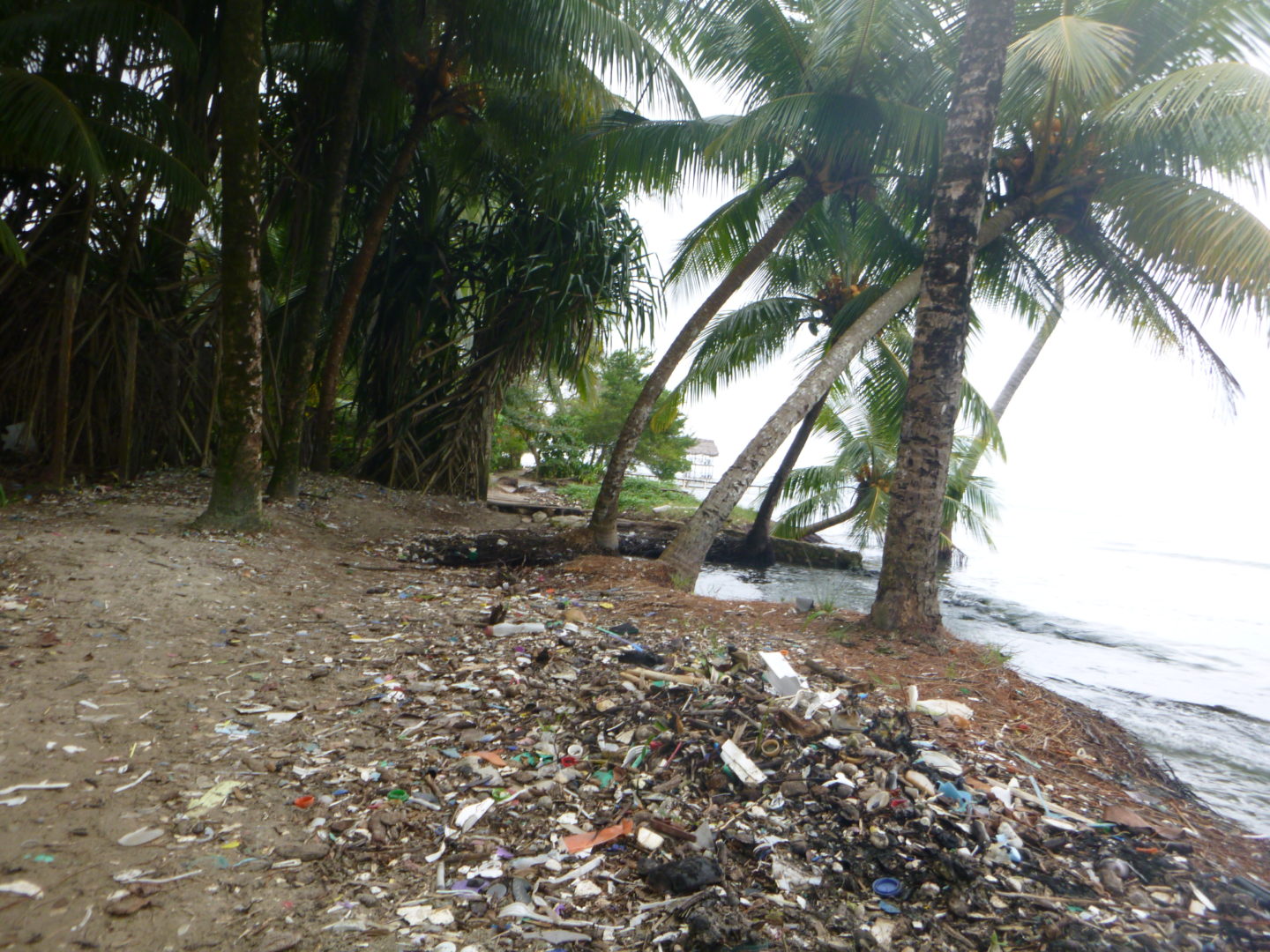 Plastic along the shoreline of Livingston beach. Image courtesy of Sarah Pearl.

Last year I attended a lecture by Emily Pen at the ‘Explore’ event in the Royal Geographical Society. Here Emily spoke about the perils of plastic in our oceans. I learnt how the accumulation of plastic disposal in the sea is a catastrophic global disaster, not just aesthetically to our shores but also biologically to aquatic and terrestrial wildlife. Plastic particulates which build up enter the ecosystem, being consumed by microorganisms, these are eaten by fish, which are eaten by larger predators such as birds. Plastic has been found in the guts of large animals causing their death (bio accumulation). This issue is also a concern for us, man kind. As I was eating a tasty bowl of sea food soup, I noticed stringy blue plastic attached to my food. It was horrific. When listening to Emily talk in London, I understood the problem. However, it was not until I walked the Livingston beach, that I truly fathomed the extremity, intensity and vastness of this detrimental phenomena.

I entered the seven alters with a heavy heart. Two hours of walking through plastic took its toll. The beach could have been so beautiful but instead it was littered with so much plastic. Lovely seashells littered entire areas and next to them piles of plastic rested. It made me contemplate other global issues of which there are so many. I have seen a handful on my journey – deforestation, pollution, poverty, political injustice and the unequal distribution of wealth – to mention a few. The list of course goes on. How could these all be combatted? And where should one start?

The other evening I was speaking to an old man about my time in Montana with the forest service. He claimed the world to have been destroyed by previous generations and that our current young generation were doing great things to fix it. He gave me hope. It was true, there are charities, governmental agencies and people striving towards environmental stability and restoration. With advances in technology there could be a break through. Emily Pen showed this with her successful ocean clean up projects for the Pacific Islands (definitely worth checking out online) .

Visiting the seven alters gave me further inspiration. As I walked through the lush, dark green, shaded jungle admiring the grand, intertwining, impressive trees bordering the clear river I remembered how beautiful our planet is. I balanced on stepping stones trying not to get my feet wet and wandered up stream. I saw several beautiful, blue lakes which were absolutely magical. I found a plunge pool and had it all to myself. I had a quick dip in the cool, refreshing, beautiful water. Then I sat on the edge listening to the water trickle, birds sing and trees rustle. Not another sole was insight. This pristine place was incredible and more importantly it existed. Consequently, we must protect these natural wonders which are apparent and restore others which have been damaged by us. 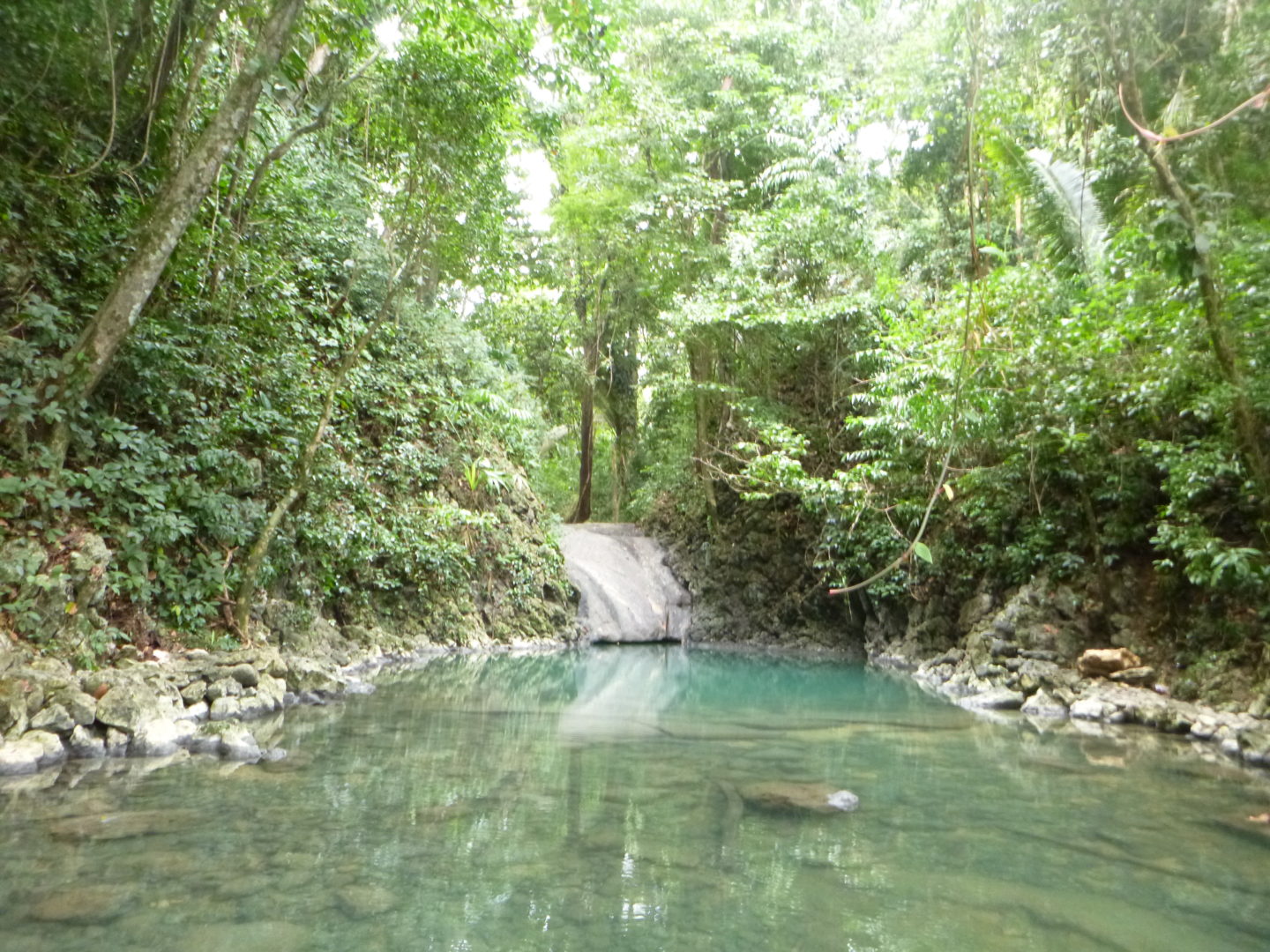 The walk back to the hostel was just as devastating as the walk to the seven alters. The plastic overwhelmed me yet again, never before had I seen anything like it. As I walked I saw a huge pig playing in the plastic. Other domestic animals were chilling on the sand. It was surreal. Several stray dogs roamed around, one looked as if it had rabies. I quickly walked on reaching the hostel, ready for a relax and contemplation in the hammock. 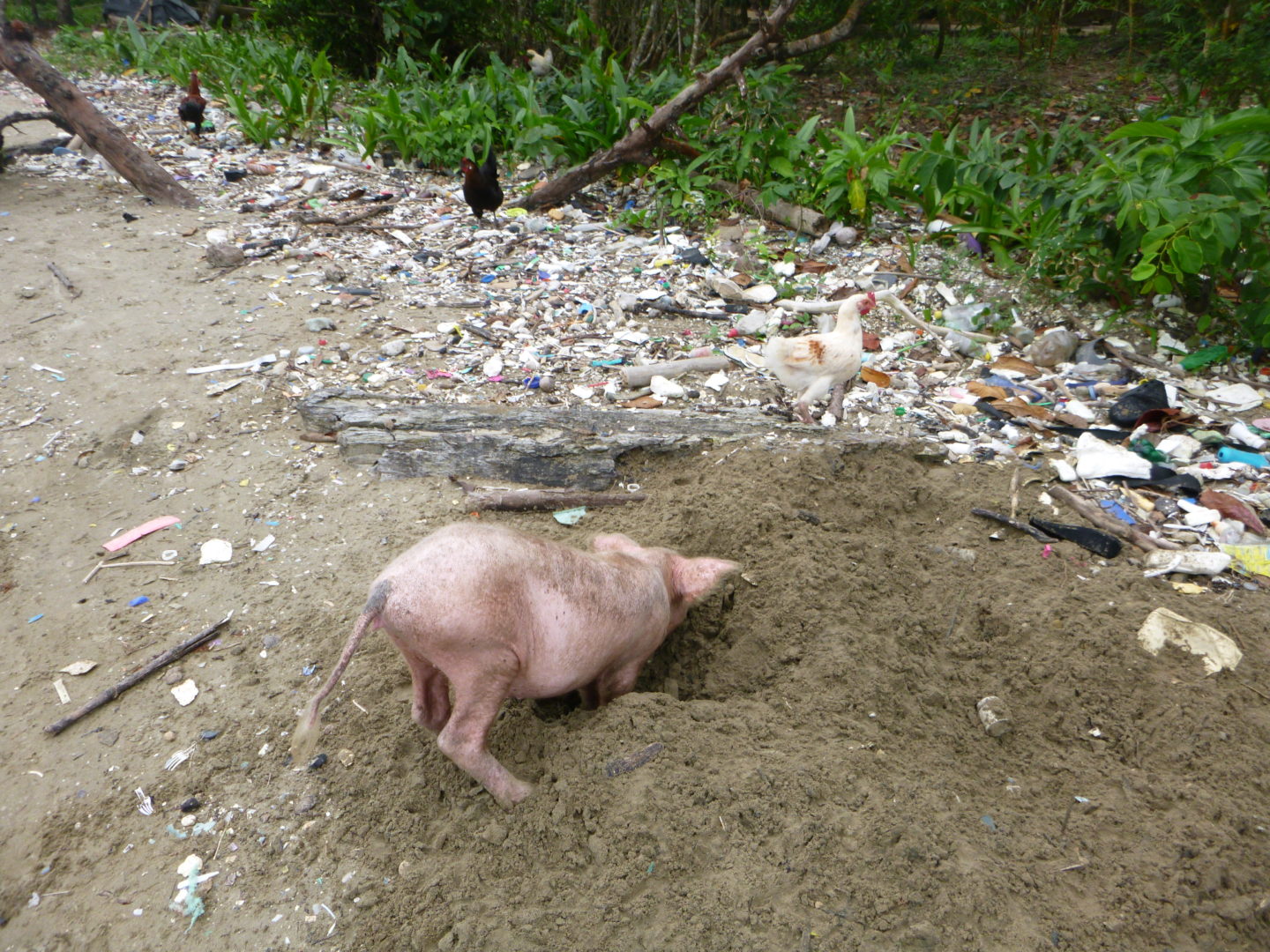 "As I walked I saw a huge pig playing in the plastic" Image courtesy of Sarah Pearl.

I spoke to the host owner about the plastic and learnt that it is carried there from Guatemala city by the ocean current. It seemed that Livingston had to pay the price for other people’s mess. This is a problem that resonates with other global issues. People suffer for other's unlawful actions. It is so unjust. The owner spoke to me about how he hired some volunteers to clean up the beach. However, it made little difference as the mess still washed in the next day, so he shortly stopped. It seemed that the source needed to be tackled – Guatemala city. Would a better education about rubbish disposal? Or the implementation of a recycling scheme in Guatemala city? I was tempted to email my couch surfing friend to talk to his uncle – the new vice president of Guatemala but instead I emailed Emily Pen to see if she had any good advice.

For now I am in Honduras, I have left behind Guatemala – a country with so many problems but at the same time so much beauty. While, the political and societal injustices broke my heart, I did fall in love with Guatemala – a country with friendly, hospitable people, tasty food, natural wonders, interesting history and 22 different Mayan languages. I learnt so much in Guatemala about different ways of living, local history and different cultures. I will miss Guatemala but am ready to explore the next place. 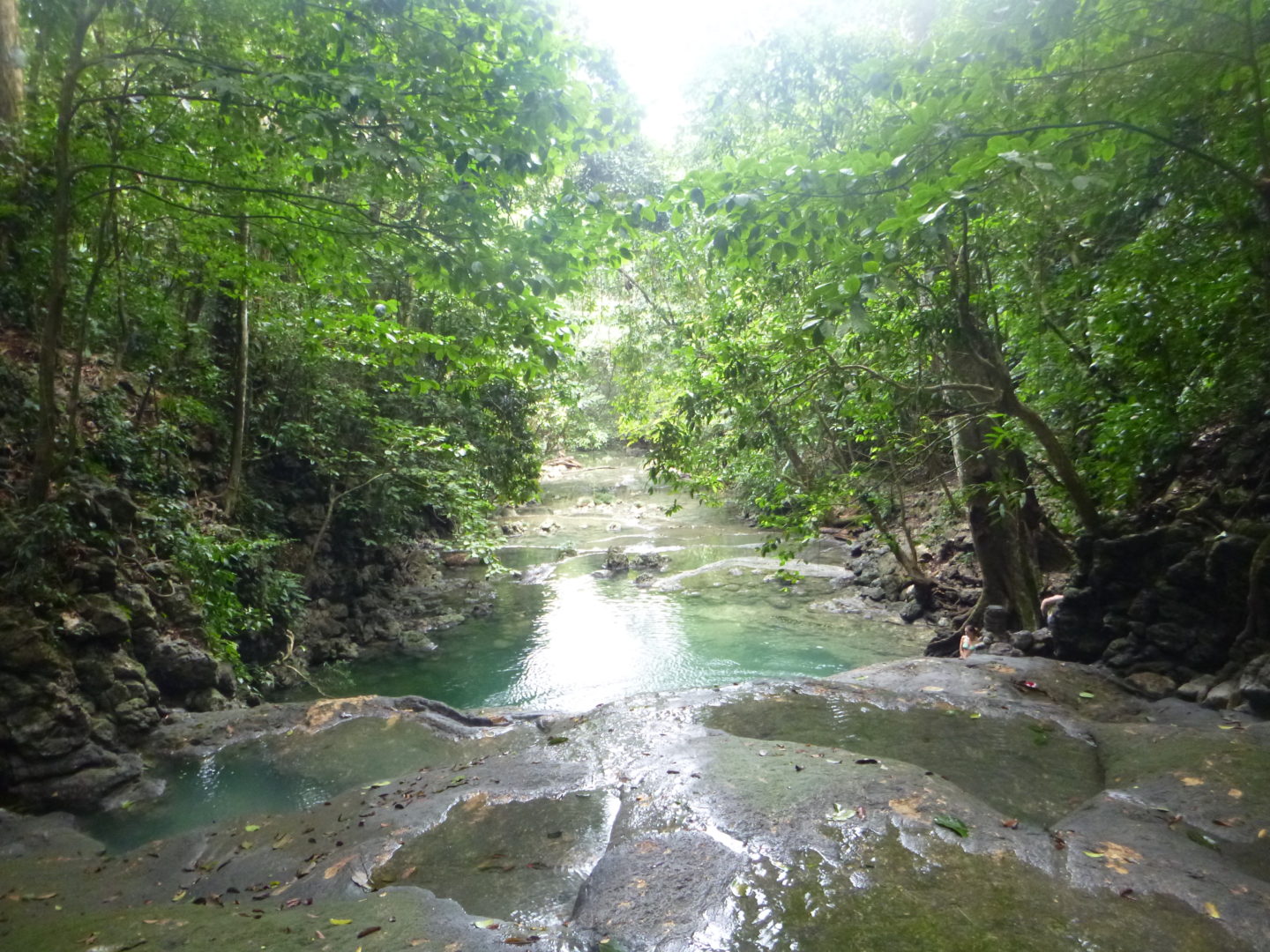